Fitzy and the Grey Squirrels 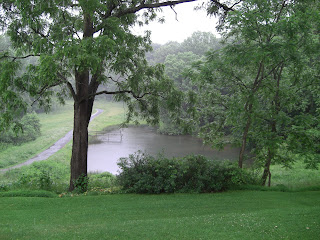 This is what it looks like in June.
See that little lane to the left of the big black walnut tree? That little lane leads to the road that in turn leads to civilization. Notice how you can't see the road from where the picture was taken (the porch of the farmhouse)?
It's a long lane - just under a quarter mile.
Here's what it looked like last week: That's two feet of snow. 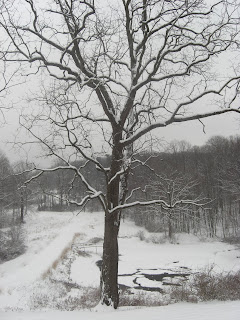 I found myself snowed in at the farm and I knew I wouldn't have enough food for the following three days, which is how long it took me to dig out with a shovel.
Well, I guess I could have eaten pasta and jarred tomatoes from last summer (and in the end I did, along with some... protein), but, come on now. The woods are crawling with squirrels.
And now that the New York Times is writing stories about eating beavers(!) (and squirrel and lots of other cute little buggers) it might be the right time to share a squirrel recipe with the public.
I realize that most of you think that squirrels are cute and cuddly, but you're wrong. They are nasty, evil little creatures! 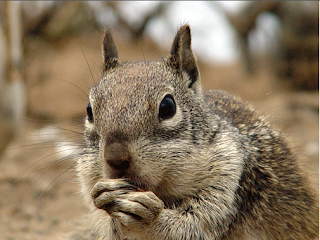 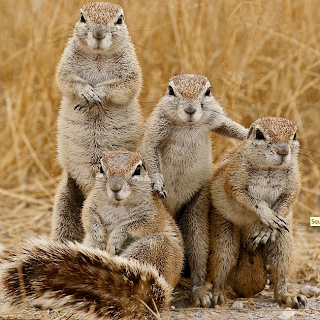 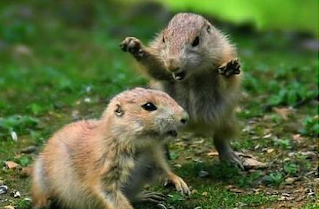 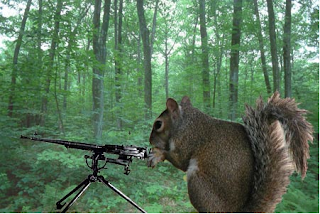 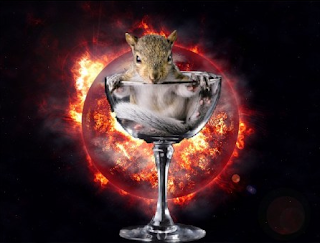 OH JESUS!
There.
Feel better?
Good.
Let's get to the cooking part...
Here's a recipe from an old cookbook called Game Cooking by Theodora FitzGibbon. 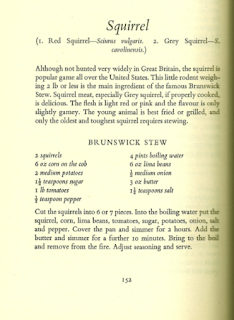 I didn't use Fitzy's recipe. I just have it here to prove to you that I'm not some backwoods hillbilly. She's written, right there in the headnote, that squirrel is popular all over the United States.
So, there.
Here's my recipe:
Squirrel Ragu
1 grey squirrel, cut into pieces
1 tablespoon fat (bacon fat, evoo, butter, whatever)
1 onion, chopped
1 garlic clove, smashed
1 pint jarred tomatoes
1 Asian eggplant, cut in pieces
Salt and pepper
Pasta
Season the squirrel with salt and pepper, then brown it in the fat in a heavy pot. Remove the squirrel and add the onion and garlic to the pot, stirring, until the onion is browned. Add the tomatoes, eggplant, and the squirrel along with any squirrel juices, and 3/4 teaspoon each of salt pepper. Cover the pot and braise for 2 hours or until the squirrel is very tender. Shred the meat and add it back to the ragu.
Boil pasta and toss with the ragu. Season to taste.
(As an aside, this dish pairs perfectly with what are being called "natural" wines. These are wines that are manipulated as little as possible and end up tasting funky, earthy, and well, a little gamey. France has a group of cult winemakers, fermenting in this style. Les Chemins de Bassac ISA vin de pays 2007 is the bottle I drank with this dish. It was nothing short of amazing with the squirrel. Of course, vin de pays means, "country wine," so, that makes sense.)
Both the New York Times and FitzGibbon are right, too. Squirrel is much less gamey than you'd expect. But, still, it's game, so, it's a little gamey. Get over it.
By the way, Game Cooking is a great book and I'm sure it's out of print. It has recipes for any animal you can imagine - raccoon, sea gull, turtle, and so on. It's also full of helpful and disturbing tips. If you collect cookbooks, like I do, then you should try and find yourself a copy. You never know when you'll need to un-taint some venison!