On Learning to Listen 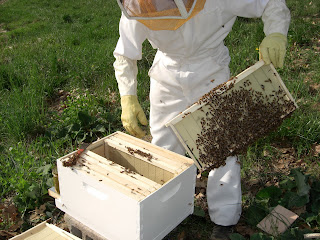 I've been keeping bees since I was 12 years old. That was 20 years ago, and still, they amaze me. I was a quick and able student in the beginning. Both my grandfather and next-door neighbor, Rob were eager teachers. Rob signed me up for beekeeping courses at the local community college, and my grandfather murmured instructions as we bent over the buzzing hives.
As told to do, I pulled frames from the hives, sliced open drone cells, lopped off queen cells, and inspected the bees' bodies closely, searching for mites. I executed orders like a mindless soldier. Smoke the hive? Done. Scrape propolis from the edges of the frames? I was on it. My brazen attitude was mirrored by the insects', and in the beginning, I got stung a lot. When the queen murmurs, "Sting the crap out of that kid; teach him a lesson," the workers listen. And it happened. Once, it happened and I almost died. I should have known better; I should have been listening. The bees sing to you or they scream at you - and that day, they were screaming.
And it sounds like a scream. The buzz of 60,000 angry bees sounds, well, just like that. Their pitch elevates when they're upset. It can get to the point when all you can hear are the bees, screaming with their wings. The cacophony is dotted with tiny staccato pats, the punctuated landings of a thousand angry workers dive-bombing your veil. It's scary. 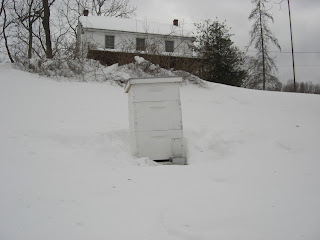 The evening I went into anaphylactic shock, I was wearing a veil with a drawstring. These days, most veils are zippered onto full body suits, but until recently common honeybee veils had a drawstring at the bottom, which when pulled tight enough, would keep most of the bees on the outside. This technology speaks to the Zen of yesteryear's beekeeper. If a bee made its way inside your veil, you'd just relax, and she probably wouldn't sting you on your face. That peace of mind and body was more than I could handle at 16. That evening, ten bees made their way into my veil. Eight stung me on my neck, in a bull's eye around my jugular vein, before I ripped off my veil and started running. Between the hive and the car, I was stung four more times. I remember itching all over. I remember looking in the mirror. I didn't recognize the boy staring back. Then, I remember waking up.
Rob was with me that evening and he had saved my life. A shot of adrenalin (he's a doctor) brought me back to the night, gasping. I spent the next twelve hours throwing up.
Two weeks later I was checking beehives with my grandfather when he told me I should find another hobby. Bees were too dangerous for a boy like me. I felt hot in the face when I heard his words. As we leaned over the hive, the bees' tone grew higher, and I flushed, as if they echoed his thoughts.
I felt as though he didn't understand why I had tried to learn about bees in the first place. It was to spend time learning from him. I was angry. That night I called Rob and told him I needed to be cured of my allergy. He knew an allergist, he told me. Maybe there was something we could do.
I went to the allergist for the next four years. Every month, I received an injection of honeybee venom, after which I sat in the waiting room for an hour, waiting for a reaction. None came. But one hour a month for four years adds up to two full days of my life. It gave me enough time to reflect on what I had heard that late evening, enough time to completely understand the scream of the bees. I finally realized that they weren't screaming at me. They were screaming to me.
In exchange for a place to live the bees let me look into their world once in a while. If I bring nervous or negative energy to their house, or if I overstay my welcome, then I am being an unpleasant guest. It's rude on my part and they have no qualms about letting me know. Now, if I hear the pitch of the hive increase, I know it's time to leave. Since I've learned to listen to the bees, I have not been stung in over fifteen years.
Last weekend I drove from my Brooklyn apartment to the family farm where I keep the bees. Snowdrifts spilled out onto the road, like pure white dunes. The wind made them move like water. The snow covering the lane to the farmhouse was three feet deep. I had to park the car on the side of the road and walk, taking a break every hundred yards to catch my breath.
As I approached the hive I was surprised. The bees had cleared their front entrance of snow. The warmth they generate had radiated upward and melted any that would have collected on top of the hive. I wanted to see if they were alright, but opening the hive would let their warmth escape. I've learned when not to impose.
I bent over and placed my ear on the side of their home. It felt cold. I closed my eyes and listened. From inside there was a calm, steady hum. It sounded something like, "We're alright, we can take care of ourselves, we'll see you in the spring."
Posted by iknauer at 7:02 PM