The Pleasures and Dangers of Caramel

Now that chefs are the culinary equivalent of rock stars, many have the requisite tattoos to match the status. Michael Symon's punctuation-less "Got Pork" is not my style. But Hugh Acheson's radish is nice. My all-time favorite chef tattoo (sort of a tattoo; scarification, actually) is Gabrielle Hamilton's. She has an asparagus spear carved into her upper arm. It's pretty badass.
I don't have any tattoos. I prefer more traditional kitchen markings like scars and burns. I got a new one, a good one, last week. I've been showing it off since. Of course, the kitchen is full of things that might cut or burn you, but this particular permanent branding comes from the famous (and dangerous) kitchen tattoo/scarification artist called Caramel, which if at the correct stage is around 340°F. It happened when I flipped an upside-down apple tart right side-up. A tablespoon of the liquified burnt sugar spilled out of the pan, landed on and oozed down my forearm, burning all the way, like a lava flow. It was all I could do not to drop the dessert. 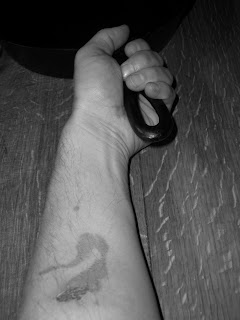 Yup, that's gonna leave a mark.
If you eat dinner at my table anytime between October and early March there's a good chance your dessert will be my version of a tart tatin. It's by-and-large one of my favorite desserts to make and eat. It's simple, flavorful, and really lets those apples take top billing.
And I have an affinity for apples.
There are two ancient apple trees that grow on the farm. One is something like a Golden Delicious, which is the traditional apple used in the French dessert. The other apple tree, however, is similar to a McIntosh, but tart like a Granny Smith, and is the fruit flavor I prefer in my apple desserts. Of course, there aren't enough Knauer farm apples for you to use, too, so the closest commercially available variety is Winesap. If you can't find those, use Gala.
Most importantly, unless you're addicted to pain (or want desperately to be one of the cool kids), please, take care when flipping over the skillet.
Here's the recipe: 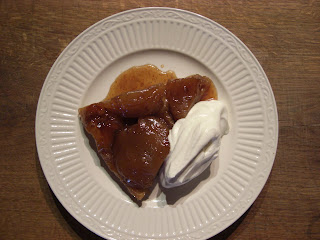 If you find yourself strapped for time, or energy, use bought, frozen puff pastry instead of the pastry dough.

Work together the flour, butter, sugar, and ½ tsp salt with your hands until mostly combined with some small lumps of butter remaining. Stir in 2 Tbsp water with a fork. Press a small handful of dough together, if it looks powdery and does not come together, stir in the additional 1 Tbsp water. Transfer dough to a sheet of plastic wrap. Using the edge of plastic, fold dough over on itself, pressing until it comes together. Form the dough into a disk, wrapped completely in the plastic and chill for 1 hour.

Whisk together the remaining ½ cup sugar, zest, juice, ginger, cinnamon, nutmeg, and ¼ tsp salt in a large bowl. Peel and core the apples, then halve them and toss with the sugar mixture.

Roll out the pastry dough on a well-floured surface with a floured rolling pin into a 13-inch round. Place the apples, cut sides up over the caramel in the skillet, then drizzle with any remaining sugar mixture. Top the apples with the dough tucking the edges of dough down around the apples. Cut 6 to 8 steam vents in the dough.

Bake the tart until the crust is golden, the filling is bubbling. This will take about 45 minutes.