The Jedi Knight and The Idiot 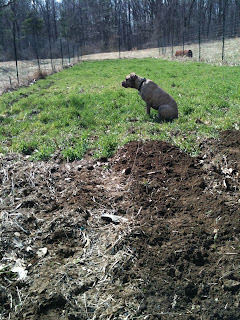 I have two dogs. They love the country, as you might guess, and spend as much time outside as possible. Their personalities are almost opposite. Elvis, who I believe spent his last life as a Sherpa or a Jedi knight, often sits in the winter rye that is growing in the garden and contemplates nature. 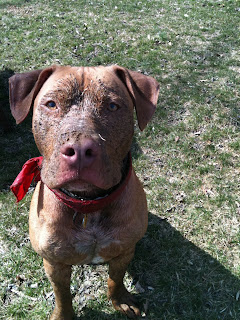 Nelson, on the other hand, is sort of an idiot. This week he spent half an hour snapping at bees as they flew out of the hive to stretch their wings after a long, hard winter. Every few minutes he would get stung in the face.
After about a dozen stings he gave up. He walked to a little muddy stream that was plump from winter run-off and stuck his entire face in the mud to relieve the effects of the bee venom.
This all happened as I placed onion sets in the garden. The onions can stand the cooler spring and need extra time to get going. 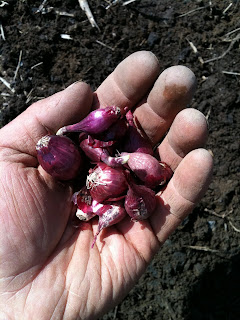 Planting onions helps me relieve the sting of anticipation for real spring to finally happen by letting me get my hands in the muddy spring earth. It also gives me a few quiet moments to contemplate nature.
People take after their dogs, they say.
Posted by iknauer at 2:14 PM