After Apple Picking -OR- Where Robert Frost Went Wrong

There are two ancient apple trees on the farm. Best guesses place them over the age of eighty, but no one is really sure. One is a yellow variety, probably close to a Delicious, and the other is similar to what we know as a McIntosh, but tangy like a Granny Smith. The last few years brought some pretty terrific apple crops. This year, due largely to the disgusting weather, there was far less fruit. But apple-picking day is not really about quantity; it's about making cider with what apples are ripe and drinking whatever's left of last year's hard cider.
Robert Frost, of course, had that great poem about carefully picking apples from the boughs by hand, making sure they didn't hit the ground, then growing so weary from the long day on the ladder he wishes for nothing more than to hibernate like a woodchuck. Seriously, he wrote that. Except, when he wrote it, it was pretty.
Our apple picking didn't end pretty, like Frost's poem does, but at least "overtired" was not an appropriate description of our state of mind. 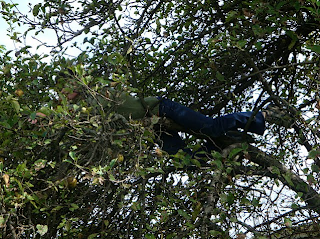 First, Cecily, my sister, climbes the trees. She's always been limber, and only fell out once, so she still has the job. There's no "Cherish in hand, lift down, and not let fall", either. She just shakes like an epileptic and brings apples plummeting to the ground. They bruise and break, but who cares? They're meant for the "apple-cider heap".
Above, Cecily, making it rain apples, like dolla' dolla' bills, y'all.
We gathered the apples in the trailer of the tractor, drove them down the hill to the house and washed them off. This is when we started drinking last year's hard cider and a few growlers that Alan and Jesse picked up from the near-by Sly Fox brewery. (On a side note, I love typing the word brewery. It's like playing that children's song on the piano, using only the black keys.) 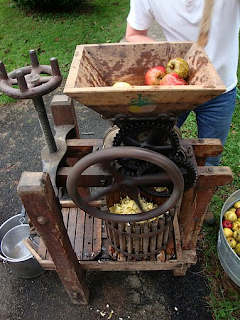 We've got this old cider press that lives in the barn. It's slow going, but that doesn't really matter, it still works. We all took turns rotating from job to job. Drinking, naturally, is included in the work rotation. 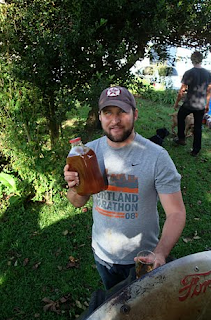 A few hours later we ended up with something like fifteen gallons of fresh cider. Most people took some home and I put five gallons in a bucket to ferment for next year. It was a fine day.
Here, Jesse York, beverage expert and cider drinker, at the end of a long, hard day. Sara Bomberger took these nice photographs, including this one of Jesse and his take-home.
More later about hard cider and cooking with cider where we will undoubtedly hear more from Alan, the guy in this next picture. 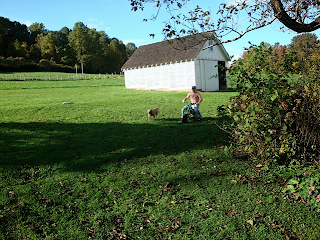 Alan, having more fun on apple-picking day than Robert Frost had in his entire life.